Can't believe I bought a Squier. Actually it is a JV 83 Squier from Fujigen Japan. I had to learn that these Instruments were superiourly built instruments. Here more infos on the extraordinary quality of these instruments:

JV ST-Series consisted of the Squiers and two lines of JV-ST Fenders (85 and 115). The base of these guitars was equal, except for PU, electronics, trembar and finish which was cheaper on the squires. So the owner of this guitar decided to restore the guitar in all these aspects but with superiour quality than 85/115 line had. So this guitar was professionally refinished on body and neck with a very light nitro finish. The PU were replaced with Lindy Fralin. The electronics were updated, so you can lower the volume without any loss of highs. The radius is modern and feels like 10. Pleasant 3.4 kg and a low action to die for. Playing comfort is simply fantastic. Reminds me of my JC 004 MB, the neck feeling like a modern version of my real '64. Someone decided to pimp the highest quality  JV Strat.

The sound of this guitar is unbelievable, absolutely superior to all Reissues I have played so far. A fantastic player for a price you were able to get Pre CBS Strats in the 50/60ies.

These JV instruments are already highly sought after with values up to 4'000$. This one is a player not a collector in the best way you can imagine.  But guess what: 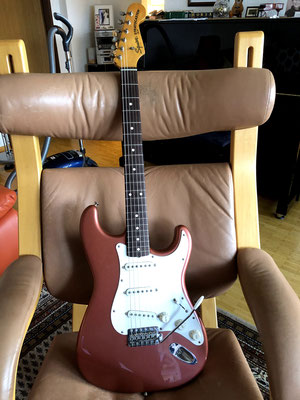 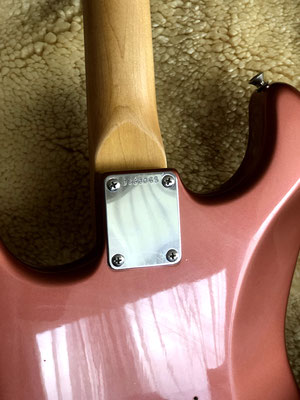 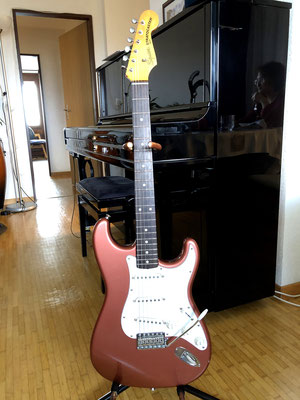 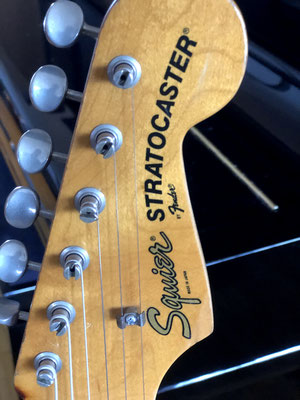 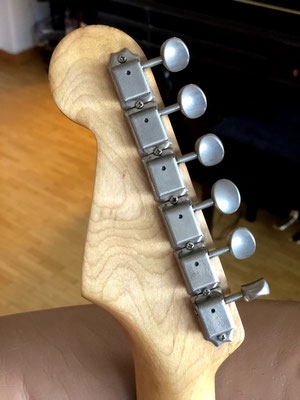 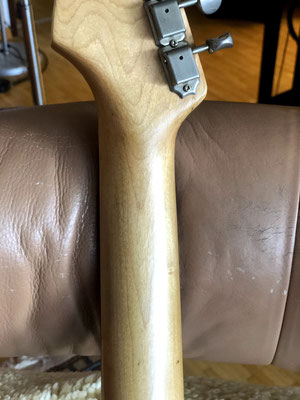 This guitar was a lucky punch. A great player and a real lady soundwise! Profound 3 dimensional sound that never molest your ears with harshness as maple necks and ash bodies tend to do.

I had waited over 2 years to go for a real 50-ies Strat. There are not many around and of these that are around I didn't really like any of them that much. I felt that this one was IT and I was lucky to have support in buying. This one really did the trick for me. Thanks Paul you made it happen!!

1958 Fender Stratocaster. This guitar features a Swamp Ash wood body, and hence, originally came from the Fender factory in 1958 as a Blonde guitar, as Ash wood was used at that time exclusively on Blonde guitars.

The guitar features a body refinish in nitro lacquer, translucent Blonde, by Fiesta Finishes™. The neck features original finish on back and headstock, with a very old, light overspray, which has checked and looks original. The fingerboard has been refinished, along with a nice, pro refret. There is one tiny dent on the neck which has a small amount of filler. There is also a small chip in the wood near one of the tuner ferrules.

The trem bar and trem covers are reproductions.

The guitar comes in the original '58 Tweed case. This case is structurally sound. no collapsed wood or bad corners. Latches and hinges work fine. The tweed, and leather is quite worn, and it appears that the original gold lining was tinted to be red. A sturdy, if worn looking, tweed case.

All important parts are original, making it also a collector's choice guitar. It is known that building quality in the CBS period was aimed at massproduction. There were good guitars, there were mediocre guitars and then there were lots of bad guitars, especially towards the end of the 70ies. This one is a 72 guitar with a fantastic neck that is comparable to a 63 or even slightly chunkier without having a baseball feel. It plays with a fantastic feel. This guitar sounds as great as it looks. It is very resonant acoustically and sounds full of life plugged in. No weak spots, well balanced. She plays as she looks, superiour! Gregor Hilden has played this guitar and claims that it is the best 70 ies Stratocaster he has played.

I had this guitar inspected and set up by Matz-Guitars.ch

So it seems that the instrument has been professionally refretted and the board re-radiused to 9.0" (modern Fender spec), with 6150 Dunlops. This makes it a dream to play. A new nut has been cut for the guitar to match the modern fretboard radius.

This is a high quality instrument built by masterbuilder Yuriy Shishkov. He created a vintage instrument very close to the original but with top notch high quality ingredients. It is a lightweight with 3.3 kilos. The finish is the most beautiful finish I have seen on a Strat. The neck has a pleasant C-shape and is great to play. It is not thick but not thin either. The resonance of the instrument is simply divine. Plugged in it sounds great. Addiction guaranteed. Update: There has been a relic from my part, check last foto!

This is one of the earliest serial numbers from January 82

This guitar sets up perfectly and plays like a dream. The very thin frets play perfect, bending is possible with no problems unto the highest fret. I personally am thinking about changing them to Dunlops 6105.

Guitar has been played and has a few dings in the wood and some nice finish checking in the thin nitro finish.

The neck is very very thin as all of them early Fullertons. This is not everybodys taste. Who likes it will love this guitar. For all collectors: The fingerboard has been sanded. Projob! Feels great.

Great player with a cool vintage sound you will not find on new CS strats!! These Fullerton AVRIs are true great players in its own league. This one is one of the first AVRI guitars with collectible Red Bobbin Pickups. The best you can wish: collectible and a great player!

Greg Fessler's masterbuilt 57 is as good as it gets. Playing feel and sound is superior. Bell like ringing Sound is a dream. CS Teambuilt Strats do not come near this quality. Handwired fat Ybarra PU

It used to be Gregor Hildens personal guitar. Fantastic sound thanks to its resonance and the killer PU handwound by Aby. Wonderfull neck, a growling sound. Blues pur! It roars like a lion. Killer guitar!!! All original, paperworks, OHCS! Cryotuned!

A dream come true for a guitar player. Imagine a 64 with outstanding sound, playability and resonance. This is the holy grail for players. All that have played this guitar including myself state that this is one of the best vintage 60ies guitar they have ever played. This is not a partscaster although some parts have been replaced, including the middle PU (70ies PU). All CS instruments on this page are superiour instruments but this guitar beats them all in sound and resonance. .....this is as good as it gets! 7.47 pounds!! Now professionally refretted and improved by Matz-Guitars.ch Plays like butter!!!